Lessons from a Goose

Posted by Warren Bergen on Wednesday, April 24, 2013 Under: Other Madness

Lessons from a Goose

When I run, I route my path past a small lake as it is the most scenic option. Today, it hovered just around the freezing mark and as I passed the lake I noticed a Canada Goose standing on the ice of what was the middle of the lake. I wore shorts, a long-sleeved shirt and a hat to keep the chill off. After skipping past the John Mayer song on my iPod, I looked back and the goose had taken flight…towards me. Landing just behind me he started running, then shouting. 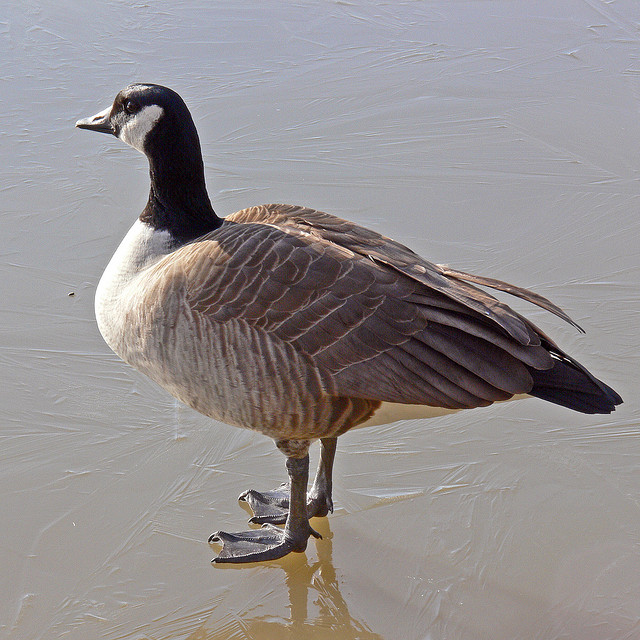 “What’s the deal?” he demanded.

“The ice! It’s April 23rd ! I should be swimming right now and instead the lake is hard and flippin’ cold!”

He motioned with his wing back towards the lake with such force I head the wooshing sound. He would later introduce himself as Dave. He was mad but when he looked back his eyes were not filled with rage, but disappointment. Like that person who angrily orders a cappuccino in a short line at a great coffee shop, I wasn’t sure that the ice was really the issue. Maybe he had a fight with his wife that morning or his tax bill was higher than he expected, so I slowed to a stop to talk further.

“I think it’s supposed to be nice by the weekend.” I offered with some hope.

“They’ve said that before.” He replied with a softness I hadn’t previously heard in the voice of a goose. “I don’t know what to think. I was in Florida!” He said with strength returning to his voice and his head poised higher. He stopped and we didn’t talk for a moment. We just stood and examined a lake that, by most historic accounts, should be rippling in the breeze.

“Why are you running?” He scanned my clothes, strangely interested in my outfit.

“How far are you running?” He asked.

“Well, I try to run about 5 to 10 km per day about 2 or 3 days a week.” I said with just a hint of pride. His body dropped as I answered him. His wings hit the pavement.

“Are you proud of that?” He asked.

“Why?” I asked, growing suspicious of his line of questioning.

“What?” I asked a little defensively.

“Pathetic!” He said this loudly as he pushed his head towards me. “You’re ridiculous.”

“For a human, that’s kind of normal…for someone who enjoys running.” I said. I wasn’t hurt by his comment because I didn’t think that geese would likely know a lot about humans.

He considered me for a moment, shook his head and lowered his voice.

“What are your goals?” He asked.

“How long will you live?” He leaned forward and pointed at me with his left wing.

“I don’t know. Life expectancy is something like 75 I think. What about you?”

“I might make 20.” He said dismissively. “What do you have left to do?” He was back to being quite loud and demanding.

“I don’t know….” I stuttered for a moment. “Ummm. Well… I want to make sure my kids get on a solid career path and enjoy life.”

“I hope you’re not representative of your species.” Again, his wings fell limp to the pavement.

“I can achieve my entire bucket list in 20. Kids? I finished that by age 5. You’ve got more than my entire lifespan to go and your to-do list seems to be limited to sofas and cheese fondue.” Both wings were now spread wide.

“I don’t fondu- ” He was starting to get on my nerves.

“Shut up.” He interrupted. “You’ve got more than three times my lifespan. I’ve seen every part of the world I’ve wanted to see. I fly, I swim and we plan for the sustainability of future generations. What are you doing tonight?”

“Well it’s been a busy week, so I thought I might watch a little television.” I barely had it out before he started screaming at me.

“If your life expectancy was limited to 20 years, you might view tonight with a little more urgency!!” He was flapping now as he spit the words out at me. “Do something. Anything! Be important to someone outside of your own family!! Go home and grab some paper. Write down everything you want and need to do before your time is up. You don't do this because you think life is long but it isn't. I'm lucky to be limited to 20 years. It makes every moment important and I'm making it matter everyday.”

I didn’t respond. I just looked at him and waited for him to calm down.

“I have to go.” I said just before I continued my run.

“Your hat looks stupid.” He said, finally exhausted by the exchange. I stopped a few meters away.

“Why do you stop here for summer?” I asked.

“South Edmonton Common has great outlet stores.” He said this in a way as if he couldn’t believe I asked the question.

The lesson: Geese may be rude and enjoy a retail discount but they do have a point.

Tags: goose life
« Back to posts