Posted by Warren Bergen on Wednesday, December 7, 2011 Under: Business
There's an old saying among investors, "Take your time getting in, but get out fast." The inference here being that finding a deal in which to invest is hard to so be careful, but take losses quickly and early because it's just part of the investment business. Venture capitalists often talk about the 2-6-2 rule. Out of ten investments, two will be a complete washout, two will be winners and six will remain in the land of the walking dead. These Zombie Corp(ses) trudge along and never seem to get anywhere. They manage to stay alive, but the big idea just never happens and usually nobody has had the guts to shoot the Zombie. Management is often an issue, however, there are times when the team is good and the deal is not. A great jockey on a proper mule, so to speak.

The walking dead are thought to be the hardest to deal with. Investors, board members and management go to tremendous effort, invest more money, and try every tactic that has worded for them before. Most times, it's wasted effort, wasted money and a lot of called favors accomplishing very little. The truth is that these should either be sold off or shut down once they fit the definition of the walking dead. The entrepreneurs don't want to kill the deal because they don't want to let go of their dream and the investors don't want to kill the deal because they're hoping for a miracle and that the thing will eventually get traction. So the company becomes a six year start-up with great things "next quarter," "around the corner" and "on the horizon". The entrepreneur either believes it can be done because he has been pitching the dream for so long it's become part of his psyche or doesn't want to to admit defeat and lose the money that his auntie ponied up with when he got started. The investor wants to believe it'll turn around and often invests more in an attempt to save what cash went down that hole previously. Everybody gets tense, but nothing changes.

The founders of ZombieCorp(se) are whipping that mule with all their might. They're at work early and they don't leave until late. They're lying awake at night trying to figure out the fifteenth way to try and make this deal fly. The unfortunate reality is that this time, money, effort and worry is wasted. They are all screaming into the ears of a horse with bad knees and wishing it Secretariat. But nobody wants to be the guy who says what others might be thinking but hope isn't true. This kind of thinking and decisive action takes a strong stomach. Because it's easier not to make the hard decision, most cling to the "failure is not an option" mantra and forever fuel the dreams of Neverland. Pull over, wash the poor girl down and let her out to pasture. The next financing round can go into another deal that has a chance and the entrepreneur can embrace a new dream and stop wailing upon the mule. 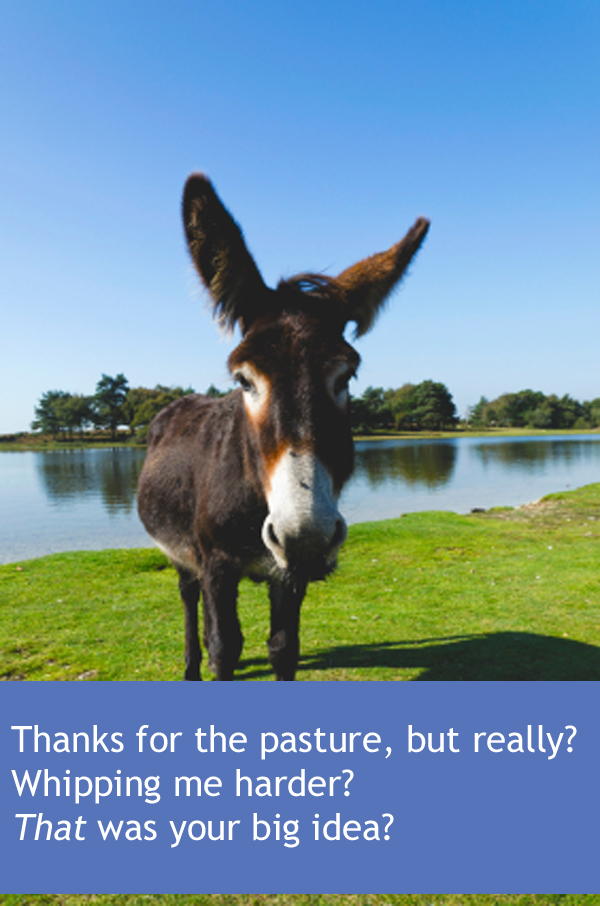 My brother has worked with race horses for his entire career. He can see speed in a thoroughbred very quickly. Muscle mass is important. But the animal also needs a bone structure that can support the force of muscles capability. The conformation, or skeletal structure as we might better know it, evidently communicates a great deal of information regarding efficiency of movement. Of course, a thin or fine bone structure with massive muscles is not a highly effective mix. So some of these horses can look like tremendous athletes, but have significant issues that you or I could not easily detect. Like most people, I could not distinguish between one horse with racing potential and one without. But I think we all have, on occasion, spotted a company that should simply not be in the running. If you're in a deal right now that has been off target for a long time, check for a few of these clues:

10 Warning Signs that your Racehorse may be a Zombie
Several years ago, I was asked by the CEO of an obvious ZombieCorp(se), for my opinion. I said, "If there's something here you can sell, get out and try again." He clarified with an angry, hurt look that he was looking for my opinion on their marketing strategy. I explained that I thought he was a capable entrepreneur, but was simply trying to get something out of a deal that had nothing to give. He mumbled thanks for the personal compliment, but I had just called his baby ugly. I didn't mean to be hurtful, I was being straight with him. He soldiered on for four years more. The company eventually sold for a fraction more than it would have four years prior. This happens constantly. Why are we doing this?

If you're in early stage deal right now, get everybody together. You, your partners and anyone that has put money into the deal. Now decide on a Kill Date. Figure out what elements need to be in place for this deal to be worth continuing to pursue at some cooperatively chosen date in the future.

Example: By day/month/year we will, at a minimum have achieved the following(just random examples):
With two or more of these elements not in place, we will sell the company or shut it down. Have everyone sign the document and give everyone a copy. This should be done more often than it is. A lot of investors and entrepreneurs agree on a predetermined sell date, so that the investor knows exactly how long his money is tied up.  But few also create a Kill Date. I see a lot of entrepreneurs that are rapidly aging and killing themselves because they can't bring themselves to shoot the Zombie. Do everybody a favor and get it done.
-----------------------
Let me know what you think.